March 23, 2012
After the fuss over the Red Bull front wing over the last few years and the infamous fluttery wing that Ferrari were seen to be testing last year it appears McLaren have their own more subtle interpretation. The following image is a comparison of the Red Bull, McLaren and Ferrari cars accelerating down the straight from Turns 2 to 3 in Melbourne. 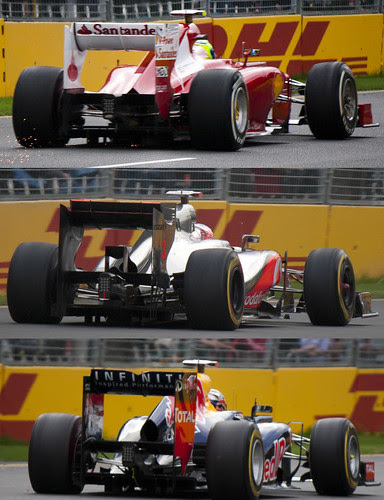 The end plate of the McLaren is tipping back, a small but noticeable amount. This isn't the only image of the effect, there are some from testing showing a dramatic change, it certainly suggests McLaren are doing something. Yet the rules this year are even more stringent on flex across the wing in an attempt to prevent the teams attempting these sort of designs.


It will be interesting to see if this story develops like the Mercedes "F Duct", "W Duct" Super DRS whatever you want to call it!

Popular posts from this blog

April 24, 2018
My two ' Photo Walks in a Virtual World ' (PWVW) posts have so far been focused on Grand Theft Auto 5. This is primarily because few other games have inspired me to go about taking photos quite like that game and partly because few other games really do the in-game camera as well as GTA-V. Since my last PVWV post, I have picked up an XBox One and more recently a Nintendo Switch. Both of these consoles have the ability to take screenshots quickly in-game. This has opened up more opportunities for me to play with gaming photos/screenshots. Showcasing some of the images captured using the various methods of screenshot or in-game camera will be the main purpose of these PVWV posts. Of course, the limitations this places on the shots I can take means often a character will be the centrepiece of the shot or it'll be an image from a cutscene. Today's focus is Red Dead Redemption since my most recent post was all about my love for this game it seemed the most appropriate n
Post a Comment
Read more

November 08, 2014
"We’re doing our absolute best to stay on top of Android updates" said Motorola spokesman, Geoffrey Fluffing. Mr Fluffing stated that Motorola "has recently become known for rapid OS updates". This seems to be a knock-on effect of the acquisition by Google in 2011. It seems they intended to continue the trend and get Lollipop into the hands of their customers as soon as possible. Last year the company, who were recently acquired by Lenovo, even beat Google to the release of KitKat on the Nexus 4, and with the recent ‘soak test’ for Android 5.0 on the Moto X 2014 they’re at it again. Now Motorola look to go one better and have actually announced the next Android version before Google got a chance. “We knew that the excitement for the next version of this fabulous operating system would be here sooner rather than later so we just went ahead and got it over and done with" quipped Mr Fluffing. We don’t think Google will mind, stated Geoffrey, after all they
Post a Comment
Read more

April 20, 2018
I’m late to the party as usual and frankly, it was only by accident I even ended up here. I was given this game by my sister after she had finished with it. I’d heard at release that this was worth checking out but I don’t tend to go out of my way to pick up new games unless I'm already a huge fan of the series as with the GTA games. So, it was a few years after release that I finally cracked open the Red Dead Redemption box and slotted the disc into my PS3. Blackwater - The biggest town in the game. I begin my Wild West adventure playing as the former criminal, John Marston, by taking an excruciating train journey. As usual, there’s a loud, self-righteous asshole talking loudly at the lady next to him. This particular asshole has an affinity for the good Lord. There are also two old ladies loudly proclaiming how civilisation is coming to the local savages; I’m sure they're thrilled. At some point someone mentions politicians being corrupt which shows nothing has changed
Post a Comment
Read more